Embroiderers in Dong Cuu are so good that they can stitch just based on simple sketches on cloth. Nguyen Thi Len, who has decades of experience in this trade, said that sketch designs can help distinguish a shop from others, which means that for the same product, one can make a simple sketch, but others may stand out for producing a more intricate sketch.

The traditional embroidery craft in Dong Cuu village, Dung Tien commune, Thuong Tien district in Hanoi, was recently honoured as a national intangible cultural heritage. For hundreds of years, embroiderers in the village have established their fame for making royal robes and costumes for festivals and worshipping rituals. 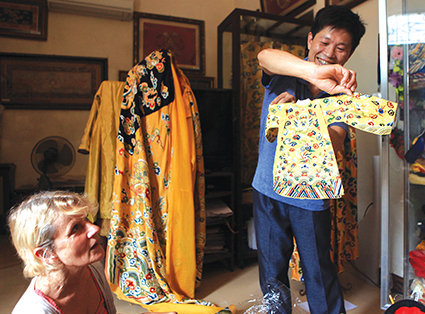 It is said that embroidery craft originated from villages in Thuong Tin district more than 500 years ago. Among the villages, Dong Cuu established itself as a trustworthy address for making and restoring royal robes for Kings, Queens and members of royal family. Now the village’s best buy products include costumes for hau dong (mediumship) ritual.

Embroiderers in Dong Cuu village are masters of different embroidery techniques, patterns and decorations. As a costume often has five basic colours of green, blue, red, yellow and while, they must also learn the dyeing technique and how to mix colours harmoniously.

It is often presumed that embroidery and sewing are typical trades of women; however, in Dong Cuu village, men are the more experienced and master at these trades. Born in 1969, artisan Vu Van Gioi has 30 years of experience and has made significant contributions to restoring and reproducing old embroidery designs. He shared that royal robes were classified into different levels, requiring embroiderers to have a true understanding of each level in order to work out correct embroidery designs and patterns as well as the correct shade of colour and the type of cloth.

Good embroiderers must ensure that their stiches are run evenly and subtly. Each embroidery product has different designs and assorted colour combinations. Embroidery is not only about stitching, but about harmoniously blending shades of colours and infusing products with the beauty of life.

In recent years, as the worship of the Mother Goddesses of the Three and Four Realms or Palaces (phu), notably the hau dong mediumship ritual, has been livened up and drawn much attention, there is increasing demand for costumes featured in the ritual. Together with UNESCO’s recognition for the worship as an intangible heritage of humanity, it has boosted the development of embroidery craft in Dong Cuu. 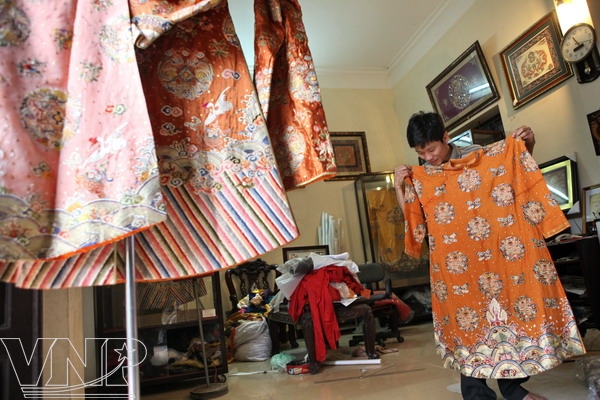 According to Ta Thi Thuy Duyen, owner of Nhan Duyen embroidery shop, in most recent years, people have flocked to the village to order costumes for the hau dong mediumship ritual, particularly during the first three lunar months, when traditional festivals are celebrated nationwide.

Embroidery can help embroiderers earn around VND 200,000 per day. Since it is not based on weather conditions but market demand, embroiderers must remain updated on the current trend and be adaptive to customers’ liking, shared Pham Van Thanh, a veteran embroiderer in Dong Cuu.

Many of them are Overseas Vietnamese, she revealed, noting that although her shop has 30 employees working at full capacity, it can’t meet huge orders from customers.

Duyen said that despite machine embroidery, many customers are still interested in hand embroidery, claiming that handicraft products have their own uniqueness and charm that no machine can surpass. Hand-embroidered products are also much more expensive than the machine-made ones. A pair of hand-embroidered shoes is priced anywhere from VND 900,000 to VND 1.2 million, a shirt which is fully embroidered manually and is used for hau dong ritual can cost between VND 5 million and VND 10 million, 10 times higher than the machine-made ones.

Dong Cuu now has around 15 private embroidery shops, each has 30 employees, who work at least eight hours a day. Each set of costume for hau dong ritual takes around 20 days to finish, or even up to a couple of months.

Despite ups and downs, the traditional embroidery craft in Dong Cuu has been preserved and handed down over generations by the villagers. According to Do Ba He, Chairman of Dong Cuu Embroidery Craft Association, the village now has 20 veteran embroiderers, who are qualified enough to provide vocational training.

In November 2016, the traditional craft of embroidery in Dong Cuu was recognised as a national intangible heritage by the Ministry of Culture, Sports and Tourism. The recognition has created favourable conditions to facilitate the development of the craft in the village, while encouraging villagers to safeguard their ancestors’ practice and promote the cultural essence of the craft.

In addition to help improve the qualification of villagers, the association has also provided training to people with disabilities and those living in hardship. It has also coordinated with the commune’s authorities to develop a complete curriculum and instructions on embroidery.