There are also many fine pieces of embroidery from the Sung dynasty.  We know from historical records that the Sung Emperor Hui Tsung (1101-1126) established an embroidery bureau called the “Wen Hsiu Yuan”.  It also is well known that many of the finest pieces were copied in the Ming and Ching period and it is therefore difficult to definitely attribute many of these pieces.

It is difficult to be precise as to when embroidery first was practiced in China but based on archeological excavations of tombs it at least dates back to the early Han dynasty which based itself near Lake Baikal in the early second century B.C.  Many Tang embroideries continue to be preserved both in China and in Japan.  One of the most famous representations of the embroiders’ artistry is the piece that came from the Thousand Buddhas at Tun Huang and that dates from the tenth Century.

Embroidery is still practiced in many sections of China.  Suzhou is well known for the quality of its work.  Additionally other areas have a reputation for embroidery but few can match the precision, art and charm of the work produced in China prior to the Modern period. 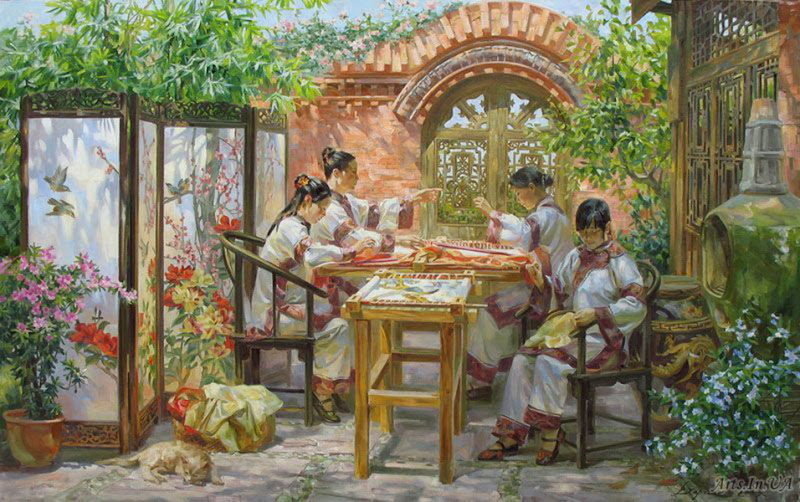 Chinese Literature records the names of many famous embroidery artists.  Among these are Kuan Fu-jen, the wife of the painter Chao Meng-fu and the ladies of the Ku family in Shanghai such as Ku Shou-ch’ien who worked their artistry in Ming times.  The painters Tung ch’i-ch’ang and Wen Cheng-ming and more recently Sh’en Chou who died in 1910 are all considered great embroiders.