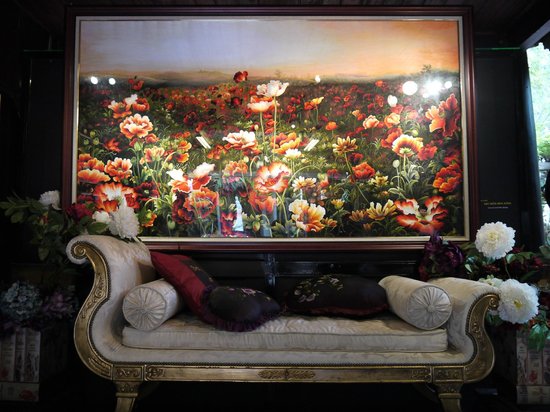 Unique features of XQ silk hand embroidery paintings come from the emotions of artisans who express the feelings with different colour arrangement. Samples of embroidery paintings are works of famous artists or photographers. The works are traced on paper then an outline is pricked with holes. They are spread with a mixture of colour and kerosene before being embroidered. It takes a group of around three artisans a month to complete the embroidery of a painting. For large-sized paintings, it takes them even five or six months to complete.

Record embroidered painting
With a wish to depict XQ’s love for Hanoi, a meaningful gift from those who live far in the south for the 1,000 year-old capital city, XQ has planned to make an embroidered painting entitled ‘1000 years of Thang Long-Hanoi.’ This will be a record embroidered painting with a length of four metres, a width of three metres, and a weight of 167 kilograms. Making the painting, QX wants to depict the figure of 2010, the year in which Thang Long-Hanoi’s 1000th anniversary will be marked (4 x 3 x 167,5=2010). Earlier, XQ had made a painting which has been named in the Vietnam record book. The painting entitled ‘Origin Song,’ with a size of 330cm x 280cm, was made by nine artisans, who worked for 235 days to complete it. 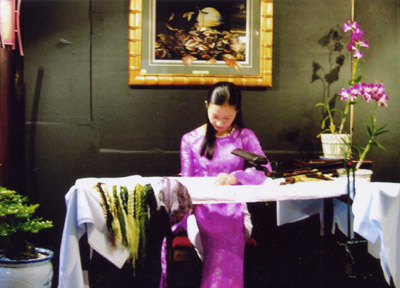 At present, the outline of the painting of “1,000 years of Thang Long-Hanoi’ has been completed with the main image of lotuses, symbolising the Vietnamese cultural spirit, alongside with tile roof of the Hanoi old quarters and pagodas. The image of a river and yellow colour of taking off dragons depicts the Vietnamese people’s aspiration which has lasted for thousands of years. Nine artists from XQ made the outline for three months. During a festival themed ‘XQ-Autumn colour of Thang Long-Hanoi’ which was recently held in Hanoi, a ceremony was held to start the embroidery of the painting, under the witness of many Vietnamese and foreign guests. Nine artisans are now making the painting from October 2006 to December 2009 (9 persons x 1000 days). Those who join the embroidery of the paintings are artisans with at least seven years’ experience. They are now working under the supervision of Hoang Le Xuan, one of the artisans who won a golden award ‘Vietnam Star.’ To complete the painting, artisans will use 12 kilograms of threads.

After being completed at XQ headquarters in Da Lat, the painting will attend the festival marking the 1000th anniversary of Thang Long-Hanoi and will be presented to the organisers of the festival for display and introduction to Vietnamese and foreign people. Historian Duong Trung Quoc said: “Mature piloting by XQ has proven great potential for Vietnamese hand embroidery. We have recognised XQ, believing in a craft which has drawn the attention of villages and brave and creative enterprises.”