“The embroidery features patterns that combine various flowers including lotus and other beautiful elements,” he said.

“Both our embroidering skills and lives are getting better and better,” he said. The center, which was launched in 2016, has developed more than 1,300 embroidery products including earphones and notebooks. It received a total of 1,750 orders of embroidery products in 2018, which were worth more than a million yuan (145,400 U.S. dollars).

Kader Rahman, a 46-year-old embroiderer in the city of Hami in northwest China’s Xinjiang Uygur Autonomous Region, is helping lift over a hundred people out of poverty using traditional Hami embroidery.

The traditional embroidery has a history of more than 400 years. When a woman gets married in Hami, her mother usually makes her a set of hand-embroidered bedding including pillows and cushions as a dowry, thus keeping the stitching tradition alive.

Embroidery is still an integral part of life for people in Hami. It is found on people’s clothing, bedding and other articles of daily use. Popular patterns include brightly-colored flowers and animals.

As a designer and embroiderer at a traditional handicraft center in the city, Rahman has not only designed more than 300 products featuring traditional Hami embroidery but trained over a hundred people as part-time embroiderers and helped lift them out of poverty. 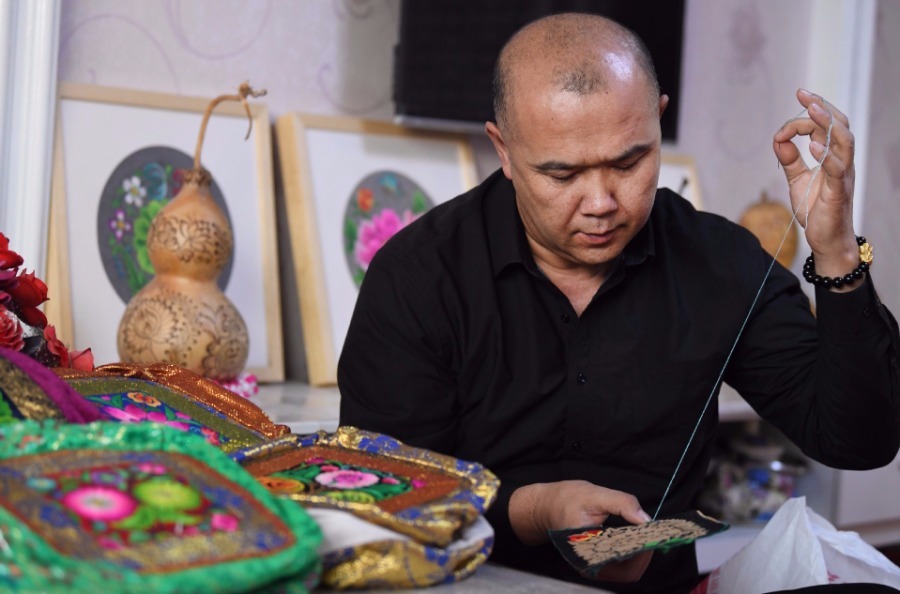 “I like the traditional embroidery, and I will do my best to improve my skills since it can help me increase my income,” said Rossaguri Iburain, a 30-year-old part-time embroiderer in the township of Wubao in the city.

“The city has not only launched 56 training classes of traditional Hami embroidery for more than 6,000 people, but sent local inheritors of traditional embroidery to study painting, designing and marketing in Beijing, Shanghai and other Chinese cities,” said Shi Yunhai, deputy head of culture and tourism department of Xinjiang.

The city’s embroidery industry is flourishing, which has benefited more than 5,600 part-time embroiderers in the city and helped lift them out of poverty. About 230 embroidery companies have been established thanks to a series of supportive policies provided by the local government.