Vietnam’s textile-garment exports still increased in the first first eight months of this year but at a slower pace than in the same period last year.

Vietnam shipped abroad US$18.7 billion worth of textile-garment products in the January-August period, up 4.4% year-on-year, according to the Vietnam Cotton and Spinning Association (VCOSA).

VCOSA vice chairman Nguyen Hong Giang said the growth slowed compared to that in previous years and below expectations due to a lack of orders and falling demand on global markets. 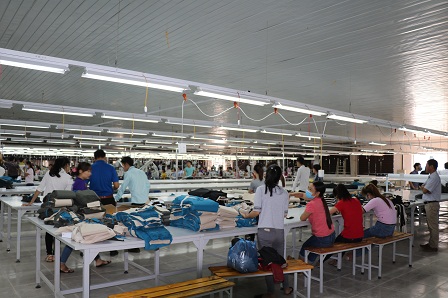 If the tough situation continues, it will be hard for the sector to earn US$29 billion in revenue this year, which is even lower the target of US$31 billion set earlier this year, Giang said at a news briefing on Tuesday to introduce the 16th Vietnam International Textile and Garment Industry Exhibition (VTG 2016) slated to take place in November.

The decrease in export orders resulted from mounting competition from rivals including China, India, Cambodia, Bangladesh, Myanmar, and Sri Lanka. In addition, Cambodia and Myanmar enjoy tax incentives when selling textile-garment products to the European Union (EU), making their products even more competitive.

In the past two weeks, a number of textile and garment exporters have had no orders to fulfill, said Pham Xuan Hong, chairman of the HCMC Association of Garment-Textile-Embroidery-Knitting (AGTEK).

Given fierce competition on global markets, Hong suggested firms invest in advanced machinery and equipment, choose high-quality materials to cut production costs and raise the competitiveness of their products, and focus on free-on-board (FOB) contracts.

Besides competition, domestic apparel firms are grappling with difficulties, brought about by the minimum wage rise and regulations on inspections.

Fewer foreign direct investment (FDI) approvals have been registered for the textile and garment industry this year than in previous years.

In 2014 and 2015, many foreign enterprises rushed to invest in the sector to capitalize on opportunities from the Trans-Pacific Partnership (TPP) trade agreement, which allows firms to enjoy tax breaks when exporting products to member states.

But investors are in standby mode in the U.S. election year as it the election result could affect the future of the multilateral trade pact, Giang of VCOSA said.

Hong of AGTEK shared Giang’s view, saying that the implementation of FDI projects in Vietnam’s garment and textile sector may be slower than scheduled as investors would wait for the U.S. presidential election result.

But Giang said Vietnam is still attractive to foreign investors thanks to its free trade agreements with Japan, South Korea and the EU, not to mention the fact that the production cost in Vietnam is cheaper than in many other markets.

Up to many foreign retailers want to choose Vietnam to invest instead of China, Giang said, citing data from the U.S. Fashion Industry Association (USFIA).