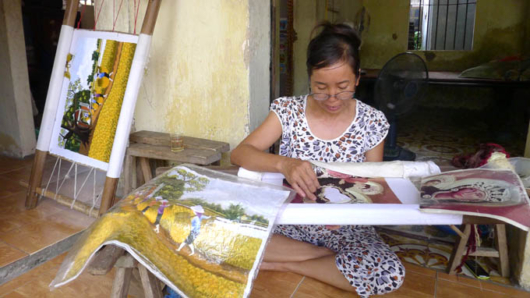 Like other villages, Nguyen Bi traditional hand embroidery village is now empty of artisans, workers, or kits. The handful of workshops that remain in operation are slowly grinding to a halt.

He added that villagers, especially youths, now choose to be factory workers or run small businesses instead of training to be traditional embroiderers, which consumes a lot of time and energy.

In the art’s golden age some five or seven years ago, the workshops in the village were always busy meeting orders from foreigners and tourist shops. Now, several of the embroidery workshops are have been turned into small factories or grocery stores.

“Years ago, girls as young as seven years old were already good at needlework and continued to master their traditional embroidery skills well into old age. Today’s girls prefer other jobs, which are higher paid and less energy consuming,” lamented Thoa, one of the few remaining traditional embroidery artisan in the village.

The 40-year artisan now earns a mere VND90,000-100,000 (up to US$5) for nine hours of work. She still practices the art mainly to keep it from falling into oblivion, though few buy or appreciate her meticulous, technically-demanding works.

“My kids wouldn’t follow in my footsteps. After elderly artisans like me pass away soon, no one in the village will take on the time-honored art,” she said sadly.

Also fearing the imminent prospect, the remaining artisans in Quat Dong traditional embroidery village came up with the idea of building an exhibit house to preserve the art and give the future generations an idea of what it is about. But the local government hasn’t given them a plot of land and the local cultural center won’t support it.

While the traditional embroidery villages are struggling to survive, shops selling cross-stitch embroidery thrive on a growing demand for the simple art.

Cross-stitch paintings are typically double or triple the price of traditional embroidery. Most shops now attract more customers with cross-stitch paintings, which cost as much as VND10 million ($500) apiece despite the simple technique, which takes only five minutes to learn.

“I’m also from a traditional embroidery village, but we have no choice but to sell cross-stitch embroidery as it currently fetches attractive prices,” said an owner of a shop.

“To embroider a leaf, we traditional artisans have to do the background and blend the colors of the threads. It takes a dozen stitches just to make the vein of a leaf. Meanwhile, cross-stitch embroiderers just need to put the thread in the right marked holes to finish a leaf,” Thuan noted.

Many youths, office workers, and housewives consider cross-stitching a hobby. It has become quite a fad, with many patterns and designs to choose from. Apart from simple cross-stitching, 3D and 5D cross-stitch art also sells well on the local market.

Unlike traditional hand embroidery, the cross-stitch technique, which derives from China, doesn’t require much dexterity or creativity. A cross-stitch work is made up of a piece of stiff fabric with countless tiny marked holes. The embroiderer simply stitches the threads in a X-pattern, changing colors according to the marks. Materials are mostly imported from China.