The Pannonian cultural zone has been characterised by the growing of grain, flax and hemp, and breeding larger domestic animals (horses, cattle). The people lived in single-storey houses made of wood or mud and wattle (in the west), or of compacted clay or unfired bricks (in the east), with straw roofs. Along the River Kupa and River Sava, two-storey houses were prevalent, the successors to pile-dwellings. Furniture was tall. Home crafts which were particularly developed included weaving on a horizontal loom and pottery using a foot-turned wheel. One particularly interesting form of artistic expression was the decoration of gourds. Clothes were made from densely smocked cloth with richly woven or embroidered decoration, and topped off with broadcloth or leather jerkins, wide broadcloth capes or sheepskin coats and broad soft-soled shoes (kapičari), or boots. Women wore necklaces made of coral or glass beads and, in Slavonia, of gold coins. 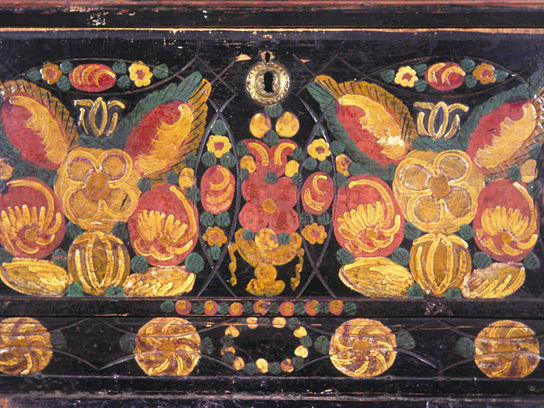 Traditional Croatian culture is characterised by exceptional diversity. Ecological conditions and the influences of the cultures with which the Croats have come into contact through history (Mediterranean, Central European, Ancient Balkan, Oriental, etc.), have resulted in the development of three specific regional cultures: Pannonian, Dinaric and Adriatic.

Annual processions of young people through the village on feast days, collecting gifts, were common (jurjaši on St. George’s Day, kraljice or ljelje at Pentecost, ladarice on Midsummer’s Day, betlehemari on Christmas Eve, etc.), as were lavish wedding customs. Music and dance traditions also varied greatly. In Međimurje, there was a specific form of unison singing based on medieval scales (known as the Old Church style), and the instruments played were the bordun zither, cimbalom and violin, to which couples would dance (the influence of the Alpine zone). The most famous dance in northwest and central Croatia was the drmeš, danced in pairs or small reels to the music of a string ensemble known as guci. Reel dancing was characteristic in Slavonia and Baranja, accompanied by bagpipes (gajde), folk instruments made from animal skins, which by the 20th century had been virtually replaced by the tambura (a stringed instrument something like a mandolin).

In the Dinaric cultural zone (highland Croatia and the Dalmatian hinterland), sheep and goat breeding was dominant. Shepherds spent the summers in the mountains with large flocks of sheep, and in winter, moved them to the coastal areas, using mobile pens and huts. In Alpine regions, families would move their flocks in spring from the villages in the valley to high dwellings, where they worked in the meadows and hayfields, then in the summer months to the mountain pastures. In the autumn, they would gather the meadow produce and return to the villages before winter set in. In highland Croatia, houses were mostly made of wood, often with a stone ground floor section, and the tall, steep roofs were covered in wooden slats. Furniture was low.