The Importance of Needlework with Women

The Importance of Needlework with Women

These sources could include samples from The Lady’s Magazine or Ackermann’s Repository, but prior to the invention of magazines, many ladies would hire a “pattern drawer”, an individual with a vivid imagination and artistic talent who could sketch them patterns to reproduce in an attempt to inspire their creations. Similarly, a woman’s ability to produce beautiful and decorative “fancy work” allowed others to judge her intelligence, (as needlework was the a key component in Female Education) social class and femininity: all qualities that play a role in their ability to be married off to a suitable husband. As stated by Maria Grace in her article discussing what it means to be an accomplished woman during this era, “… the elegance of the project would reflect upon the seamstress … fancy projects were more desirable…” (Grace) emphasizing the importance of quality handmade crafts. Essentially, the better a woman was in her craft and work, the more accomplished she will appear to potential suitors and other women.

Girls were trained and expected to have a profound understanding of the craft from a young age, as needlework was, in a sense, the epicenter of a woman’s social and economic world. From a social standpoint, needlework was a communal activity amongst upperclass women, as it was used primarily as a source for enjoyment. Needlework was very easily transported in embroidery workbags, so women had no trouble bringing their projects to and from each other’s residences. Women would gather in groups and collaborate to potentially inspire each other and use each other’s resources to explore for a wider variety of patterns to use. Being able to produce beautiful needlework pieces was not only one of the most defining characteristics of a “genteel woman” but also played a crucial role in the social and economic dynamics of the regency era. Needlework was a skill that was required amongst all women, whether it was being used domestically or in the workforce; needlework essentially served as a woman’s way to contribute to her family and/or distinguish herself amongst her peers. 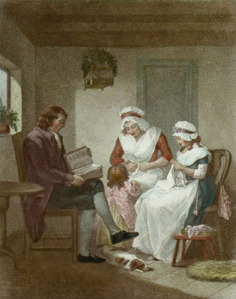 From an economic standpoint, it was a woman’s duty to produce needlework and embroidery pieces for her family, as this played a crucial role in maintaining economic stability. Needlework was also a minor source of income for many women, as employment was extremely hard to come by for women during this time due to the

fact that society was dominated by males. As Barbara Swords discusses in her essay,”Woman’s Place” in Jane Austen’s England, “…women were not only deprived of their fair share of inherited wealth and disabled from supporting themselves because occupations and professions open to them were very limited…” (Swords, 78)

Due to this discrimination against women, not only could women barely find positions of work, but were also forced to work under unpleasant conditions at hazardous locations: they would be overworked and underpaid in areas with dim lighting, no seating, and no machinery which resulted in blindness, arthritis of the joints and slouched backs (a condition that genteel women attempted to avoid at all costs, which is why painting was an extremely common practice). Needlework is an extremely prevalent theme throughout Jane Austen’s novels, but is particularly prevalent in Pride and Prejudice. Austen emphasizes the importance of needlework and embroidery through both her character’s dialogues and elaborate descriptions of the clothing worn by the Bennett girls to the Netherfield ball, as Assembly and Ballroom Culture called for specific dress and accessories, another important notion relating to the perception of a woman’s femininity and class. 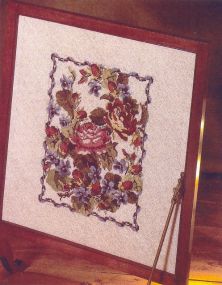 Another primary example of the importance of needlework is represented in Mansfield Park, as Austen uses a particularly critical tone to describe how Lady Bertram’s lack of care in her needlework represents her incompetence as a woman: “She was a woman who spent her days in sitting, nicely dressed, on the sofa, doing some long piece of needlework, of little use and no beauty…” (16) When Austen criticizes the needlework as being “of little use” and deems it to have “no beauty” she is attempting to symbolically convey (through needlework) that Lady Bertram is not a woman who deserves great respect or admiration, as she can barely perform her duties as a woman with aptitude.

A primary example of the importance of needlework discussed in the novel Pride and Prejudice is when Bingley, Caroline Bingley, Mr. Darcy and Elizabeth are all conversing about what it means to be an accomplished woman. Bingley states, “It is amazing to me how young ladies can have patience to be so very accomplished as they all are…They all paint tables, cover skreens, and net purses. I scarcely know any one who cannot do all this…” (88) This quote emphasizes once again (although Bingley’s tone is slightly misogynistic and pompous because he is mocking the “simplicity” of women’s work) that needlework is a universal skill all women are required to understand and practice thoroughly in order to be deemed an accomplished woman. Without these basic understandings, a woman cannot truly be classified as a “woman” within society, as she will be deemed useless.

Therefore, needlework was a central element in all aspects of a woman’s life and was crucial in determining both her social and economic status, while determining the quality of her character and her ability to perform as a woman.

Women would be forced to take these positions if they were uneducated or were unmarried; essentially without either an education or a husband, women could not succeed in Regency society (Hannah More). Even when being taught the art of needlework, which is classified as both women’s work and education, women are attempting to make themselves more appealing for men, as marriage was the basis of every females future. This notion is discussed further in Smith’s essay, as she states “Women were completely controlled by the men … their sole purpose in life is to find a husband, reproduce and then spend the rest of their lives serving him.” So, if a woman is well practiced in the art of needlework, she will be more likely to find a suitable husband, as embroidery is one of the key qualities needed in a woman to complete misceaallenous housework and other projects. Thus, women used the talents society forced them to harness to their own advantage: this was a way for them to distinguish themselves economically by marrying into a wealthier family as embroidery plays a large role in this advancement.

Similarly, as seen in the 1995 BBC series of Pride and Prejudice, the opening scene shows a woman’s hands and a needle busily at work using elaborate threads of different colors and material to stitch out the title onto a pillow, representing once again how important needlework truly was in the life of a woman. Thus, if a woman were not able to perform needlework, she would be chastised both socially and economically: she would be an outlier forced into complacency because she could not abide with societal norms. This would prevent her from obtaining work in one of the only mediums she could while also prohibiting her the ability to be classified as a genteel woman.