Textile or Brocade is a famous product of the ethnic minorities in NorthWest Vietnam.

Textile or Brocade is a famous product of the ethnic minorities in NorthWest Vietnam.

Hoa Binh Province is composed of different ethnic groups like Muong, Thia, Dzao and Hmong, among others. The Muong people in particular are very adept in weaving and intent on keeping their craft, especially in the districts of Lac Son, Tan Lac and Cao Phong. However, with the onset of industrial production and other technological advancements, preserving the art of weaving becomes a very limited struggle, if not on the verge of extinction 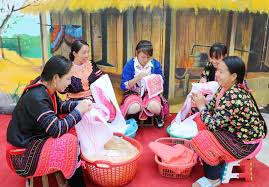 In contrast, the Thai people are more developed in textile production, specifically in the Chieng Chau, Mai Ha, Na Phon, Mai Hich groups in Mai Chau District. Most Thai people are skilled in the art of weaving, but in fact only about 15-20% and the older women generation comprise the population who depend on it for their income. In comparison, the Hmong and Dzao ethnic group make up only a small percentage of its population involved in the industry, specifically the Phuc San of the Dzao and the Pa Coh of the Hmong group. While the Thai group employ the traditional manual table loom in producing cotton and synthetic yarn such as wool and ployester, the Hmong people utilize hemp and apply a mix of embroidery and brocade into their business. The Dzao ethnic group prefer simple embroidery.

Textile or Brocade is a famous product of the ethnic minorities in NorthWest Vietnam. There are several ethnic groups in the region, but each has a distinct product indicative of its character as a collective yet unique entity.

In Van Ho (Moc Chau) and the districts of Bac Yen, Phu Yen, Thuan Chau and Song Ma, the Hmong people still use the traditional back-strip looms for hemp weaving. However, the soil condition in the area is poor, making hemp hard to grow and its production limited. So instead of making their own cloth, Hmong people sometimes have to buy China-made industrial fabric or even ready-made clothes in the local market.

Thai weavers utilize synthetic yarn for their brocade. On the other hand, textile in Lai Chau is more diversified with the combination of skills from the Thai, Laos, Lu and Hmong people. Thai textile is the most prominent in the province, with brocade style similar to the designs in Hoa Binh and Son La but with the exception of cotton as its material.

The Laos ethnic minority group in Lai Chau also produce brocade using both weaving and embroidery techniques and synthetic yarn as their primary material. But they do not produce clothes much for commercial purposes than for personal consumption. Their major consumer target are foreign tourists in Sa Pa, Lao Cai Province. The Lu people in the Lai Chau Province also produce brocade using the traditional table loom and patterns similar to the Laos and Thai people. Most of their products are also for their own consumption than market selling, although the ones in Pa Pe Village, Binh Lu Commune, Tam Duong District has enough commercial stability.

The best brocade makers are: the Lao people in Dien Bien, Nua Ngam Commune; the Hmong people in Tua Chua District, Sinh Phinh Commune; the Thai people in the Thanh Xuong, Thanh An and Na Tau Communes, Dien Bien City. Majority or even 100% of the population in all the minority ethnic groups are knowledgeable in the art, but only certain groups excel, mostly because of the quality, volume and uniqueness of their products which make them stand above the rest and last a long time.