Shu embroidery is mostly concerned with showing the joys of life, and has been used in many different pieces, both practical and decorative, Although what we now think of as the Shu style matured in the Qing dynasty the Sichuan area has a history of producing embroidery that dates back several hundred years, and  Shu embroidery is considered to be one of the end products of the evolution of this long history.  With many natural subjects depicted in colorful threads, . 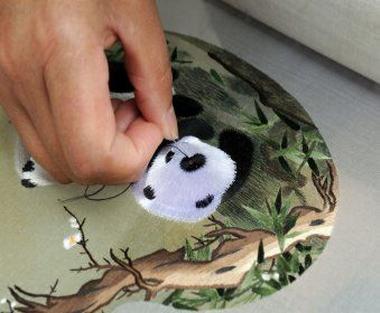 Examples of embroidery have been discovered in the Sichuan province dating from more than 2,000 years ago.  Fish have been among the most popular subjects for embroiderers from Sichuan; one account from the Western Han dynasty (202 B.C. – 9 A.D.) tells of the intricate detailing of a carp taking more than a month for an embroiderer to complete.  The production of embroidery was first done by males, but over the years it has passed to young women.  The Shu embroidery which matured during the Qing dynasty, which is also called Chuan embroidery, is still produced in China today and has been widely exported to countries all over the world.

Shu embroidery is used for both artistic pieces and for objects which may be used every day.  Quilts, sheets, slippers, or clothes may be embroidered in the Shu style, lending color and beauty to the wearer.  Equally enjoyable are art pieces produced in the Shu style.  These may include wall hangings, screens for separating rooms, or curtains.  The rich color and vibrant images found in Shu embroidery are meant to remind the viewer (or wearer) of the joy which can be found in any living thing; it is perhaps because of this joy that Shu embroidery remains popular to this day. 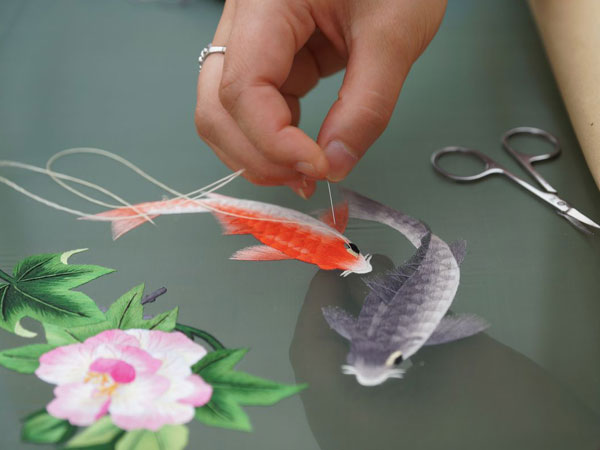 Shu embroidery is typically done on the soft satin fabric produced in Sichuan province. It uses brightly colored threads, evenly stitched to produce a delicate picture or pattern.  Shu embroidery is particularly characterized by the closeness of its stitching, which allows Shu embroiderers to highlight miniscule details in the subjects they produce.  A Shu embroidered piece may include hundreds of thousands of stitches in a single figure or animal, and may take many days or even weeks to complete.  One of the most popular subjects for Shu embroiderers is the panda bear, but scenes of nature of any kind are common.  The fish which engrossed embroiderers from Sichuan in ancient times are still often seen, as are close-ups of plants, landscapes, and detailed looks at many animals.