It takes months for embroiderers to complete a picture. Quat Dong has many well-known artisans, including Master Bui Le Kinh, who used to embroider royal garments for King Bao Dai and Queen Nam Phuong. Now the only villager holding the title People’s Artisan is Mr. Thai Van Bon, who is famous for embroidering portraits of state leaders. His embroidery portrait of the Thai King has received international

Phung Van Hung, a village elder, said “The temple in honor of the village’s embroidery master was built more than 200 years ago. Many precious objects are kept there including steles and an ancient incense burner. The 12th day of the sixth lunar month every year is observed as the death anniversary of master Le Cong Hanh, when villagers and people from other embroidery villages nationwide offer incense in commemoration of the craft’s master.”

Located in Thuong Tin district, about 25 kilometers south of Hanoi, Quat Dong embroidery craft village is considered the cradle of embroidery in Vietnam with its brand name famous throughout the northern region and nationwide.
Its reputation has remained strong since the 17th century. 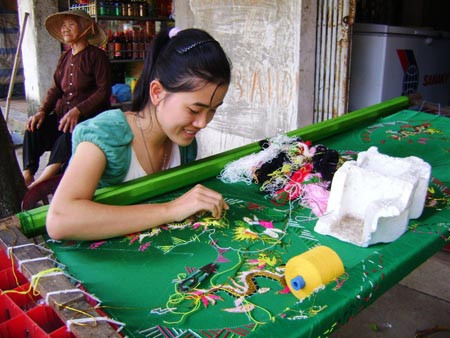 For centuries, Quat Dong has retained the traditional features of northern villages.

Under the old banyan tree at the beginning of the village is a shrine worshipping the village god, next to which is a temple dedicated to Le Cong Hanh who was honored as the master of Vietnamese embroidery.

The epitaph in the temple says Dr. Le Cong Hanh, whose real name was Bui Cong Hanh, a native of Quat Dong village, lived in the late Tran Dynasty and early Le Dynasty in the 14th century.

Hanh traveled to China as King Le Chan Tong’s envoy and learned a new embroidery technique. Upon returning to Vietnam, he taught the technique to the villagers of Quat Dong. Hanh recalled “I began to learn embroidery when I was only 8 years old. The children in the village are taught to embroider at the age of 7 or 8. In that way we have preserved the ancestors’ profession. In the past, we made only two kinds of products: silver lame embroideries and stumpwork, but the younger generation are much better than us.”

In the 1990s there were many embroidery workshops in Quat Dong. Each had 200 to 500 workers. When Vietnam changed to a market economy, the craft seemed to fade. Today each household has at least two or three people following the craft. The tiny house of Nguyen Thi Hong is full of embroidery pictures.

Sitting beside her embroidery frame, Ms. Hong said “In the past, I specialized in embroidering bedding and shoe-caps for export to Eastern European countries. Then I switched to embroidering pictures and now traditional long dresses and fashion clothing that require sophisticated skill in every sewing detail. Although now there are many embroiderers in the village, professional qualification is the main point because sometimes there are embroidery pictures which only a few people can do.”