Vietnamese textiles are constantly being created new designs, multi colors, softness, smoothness, coolness … which are better, suitable for the modern trend, meeting the demand of various ages and cultural identities of ethnic groups, each local, each residence area by designers. However, trade villages and designers have not still ignored the ancient capital and the traditional patterns of textiles and embroidery products in the storehouse of the Museum of the Cultures of Vietnam’s ethnic groups as well as in the traditional craft villages, in the memory of the artisans. This is so invaluable and indispensable to create the premise for the textile sustainable development and consistent with modern trends. In our opinion, ASEAN countries should continue to research and collect all the ancient capital, traditional products that have been lost, continue to enrich the resources for the textile development in the future. Designers, artisans, textile and embroidery lovers continue to create new products that bring the essence of culture and traditional symbols into the breath of contemporary life. It is neccessary to build an ASEAN Textiles Museum for preserveing Textile cultural treasure from the past to the modern time.

Silk weaving has been developed for a long time in Vietnam, associated with the culture of ethnic groups living in river basins, such as the Kinh, the Muong, the Tay, the Lu, the Lao, the Thai, … This is the place where there are mudflats containning sandy soil from river and streams, suitable for planting mulberry, creating a material source of silk weaving. Initially, silk weaving appears in each family to supply for themselves, later it has gradually been developed in the trend of trade village. There are many traditional weaving villages still maintained up to now, such as Van Phuc (Hanoi), Ma Chau (Quang Nam), Tan Chau (An Giang). The weaving process for weaving silk of ethnic groups are similar, including planting mulberry, feeding silkworm, reeling, spinning, winding, fiber frame, arrange fibre, silk weaving. Traditional silk is used popularly for making costumes. The Kinh women wore four-panel traditional dresses, five-panel traditional dresses (in the past), after 1930, they wore Ao dai with two graceful laps designed many motifs and colors. Besides Ao dai for festivals, Vietnam rural women often used Ba Ba shirts, having 3 colors representing for 3 parts of Vietnam: purpil for Hue in the central part, brown for the Northern and black with a caro scarf (bandages) for the Southern. Basing on the tradition of materials and styles, designers have created a variety of costumes with modern embroidered scarves to make their costumes more deluxe.

Cotton weaving is popular in almost Vietnam’s ethnic groups (Tay, Thai, Muong, Ba Na, Ma, Khome, Cham, E De, Pa Then …). Cotton trees are often sown on milpas in December, January and harvested in June, July (lunar calendar). The processes of weaving cotton fabric include harvesting, drying, storing in baskets,spinning, winding, fiber frame, arrange fibre, weaving, dyeing. Cotton products are used to design costumes, blankets, pillows, bags, scarf … expressing each ethnic group’s cultural value in each region. For example, in the North of Vietnam, costumes of the Tay, the Nung, the San Chay are mainly made of cotton fabric that is indigo dyed, designed motifs by joining colorful fabric pieces, symbolizing the life and human. The Thai ethnic group in Vietnam includes 4 local groups: Thai Den, Thai Trang, Thai Man Thanh, Thai Hang Tong. Each group’s characteristics are shown by many elements, especially “xua com” – a kind of short hugging shirt. Unsimilar to the standing collar on the Thai Den women’s shirt, the Thai Trang women’s shirt has a heart-shaped collar, attached to the brace. Both the Thai Den and Thai Trang shirts have silver buttons (now white metal buttons) in the shapes of turtle or butterfly, symbolizing the male and female combination. Each shirt has 11 or 13 button pairs, the number of pairs must be odd numbers because the Thai people concept that it is the life number. There are two types of “Pieu” scarf: “Pieu xieu” and “Pieu cut”. “Pieu xieu” is used for the elder. On the two ends of scarf, there are only small cotton buds, few motifs. “Pieu cut” is used for young and middle-aged women. On the two ends of scarf, there are two embroidery squares representing the earth, circle buds are decorated on the outer edge, symbolizing the sky, embroidered motifs in the shapes of animals, plants, geometry, spiders, crabs, etc… by color threads, symbolizing the life. 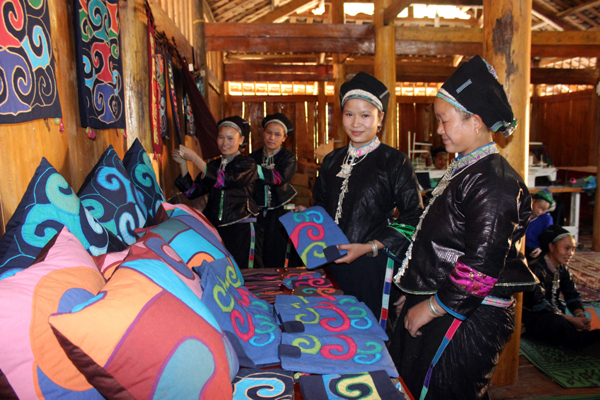 When falling in love, the Thai girls often give the boy Pieu scarf as a souvenir, symbolizing the love binds. Their scarf is carefully kept until they die, be cut in half, each part will be buried with them to hope finding each other in the afterlife. Costume of the Phu La ethnic group (Phu La Lao group) is made of cotton fabric, dyed indigo , embroidered motifs, remarkably the shapes of buffalo teeth, dog feet … to reflect their totem and wish the ancestors bless them with good health; besides, there are swastika motifs (derived from the Buddha Land), showing their wish to be always blessed with good things by Buddha.

In the Central – Highlands and the South of Vietnam, most ethnic groups use cotton fabric. Their costumes are not colorful, but each color has its own meaning. Black and indigo express for the land, forest trees. Red symbolizes the color of fire, vitality, rise, passion, love and desire. Yellow shows the sunlight, harmony of human and nature. Blue represents the sky, the color of trees, mountains and forests. Through their costumes, motifs are designed on cotton fabric, we can see the folk concept of universe (harmony of sun – earth – human) and cultural customs in the life. Today, their traditional motifs on costumes are inherited to make dresses, scarves, bags, embroidered paintings, tablecloths, pen bags, telephone bags, purses …, serving the life and using as gifts or souvenirs.

Linen weaving is popular in the Mong, Dao, Lo Lo, Pu Peo ethnic groups in the North high moutainous area of Vietnam. They plan flax trees on the flat ground or rocky fields from February to April and harvest flax from May to June (lunar calendar). They often cut off all flax leaves and put them in the shade for 10-15 days, then do the processes: stripping, pounding, shredding, connecting, spinning, boiling with ash water for three times to bleach flax, drying, cooking with beeswax, dyeing indigo, embroidering, or cloth joining to have fabric for designing their costumes. In particular, the Mong, Phu La ethnic groups have a technique of embroiderng motifs without models, only basing on their creativity, imagination and skillful hands. Their motifs are often embroidered on the left fabric to be appeared on the right fabric. The Lo Lo, Pu Peo ethnic groups have a technique of joining fabric pieces to make colourful motifs in lines. The Hmongz and the Dao Tien have a batik technique with simple tools such as brushes, triangular frames, circular bamboo tubes, wild boar fangs, beewax … Linen fabric is used to make costumes, scarfs, bags …

Most of the H’mong and Dao Tien ethnic groups wear pleated skirts designed batik patterns and embroidered blocks, except for the Hmongz Trang skirt made of white raw cloth. The Hmongz’s main motifs are the snail shapes, the Dao’s are the king’s dog, the circle, the Phu La’s are pine trees.

Throughout historical periods, traditional weaving and embroidery of Vietnam’s ethnic groups is influenced by the commodity economy, the fierce competition from cheap industrial products. In addition, it is a change of aesthetic taste. Today, the young people prefer the model, the modern styles to embellish the beauty. The costumes in the traditional style is both heavy and unconvenient when working and the traditional patterns and designs of traditional trade villages change slowly. Therefore, the production of traditional trade villages develop slowly and fall into oblivion partly.

Face to real situation, in order to preserve the traditional values ​​of Vietnam’s textile, museums, trade associations, some craft villages, designers, etc., have collected and preserved tens of thousands of traditional products. Some craft villages such as Lung Tam village of the Hmongz ethnic group in  Ha Giang, silk village of the Kinh people in Thanh Oai commune, Ha Tay, brocade village of the Thai ethnic group in Nghe An … have been recovered and begun to find a new direction to preserve the handicraft weaving, embroidery by themselves and continue to develop their products from their traditional embroidering and weaving technique. These rare trade villages are asserting their position in the modern society more and more. About 20 years return to now, traditional products in the museum’s storehouse have been approached, researched and improved by artisans, designers (Lan Huong, Minh Hanh, Sy Hoang ….) to change the style of shirt, skirt, scarf, bag, pen bag, mobile bag, tablecloth, blanket, pillow … . by using the traditional materials, techniques of weaving and embroidering, so the new products can meet the consumers’ increasing need.

At present, ethnic groups have used industrial yarns instead of traditional ones. Traditional natural dyes are replaced by industrial dyes. The motifs on fabric have been improved to be suitable for cutting new products … This transformation aims to achieve higher labor productivity, shorten the manual labor process and can consume products easilier. At the weaving facilities, products are diversified with many uses such as clothings, purses, bags, towels, pillows or decorative items, gifts … In the local policy of tourism development, they have registered as a destination in the itinerary to introduce local cultural features to visitors. In addition, craft villages, designers, etc. are actively participating in Festivals, international trade fairs, etc., to honor traditional textile culture, connecting exchanges, learning and approach information on technology, science, markets to promote creativity, innovation in textile and embroidery techniques and find out the market for products, taking the initiative in the integration process, approaching international organizations and markets step by step.