Noteworthy, the costume is an integral part of life in modern Norway, and almost “obligatory” part of it, or rather its wardrobe. When tourists visit Norway, they do not get tired of admiring the beauty of the traditional Norwegian folk costume Bunad, still worn in the “modern”, rather festive life. And if you are lucky and get here on May 17 (National Day in Norway), you will find an unforgettable sight. In particular, along the decorated with national flags cities walk people in national costumes, called Bunad.

Traditionally, Bunad – festive clothes in the national style, which existed for centuries, and put on in a very solemn occasions. In fact, over 70% of Norwegians have Bunad. Besides, in recent years dramatically increased the number of men, who buy for themselves a national costume.

In stores, they sell Bunad clothes specifically as festdrakt, not as Bunad. For example, the well known and very popular among buyers is very beautiful festdrakt Silje, which was created by Dagny Berthelsen.

According to sociologists, it is an expression of a kind of protest against the entry of Norway into the EU. Meanwhile, the total Bunad “wardrobe” in Norway – estimated at more than 30 billion euros, and its value continues to grow. However, bunad differs a lot. First, “fake” national costume for special occasions, “designed” when the knowledge of old traditions was not enough. In particular, when designers drew inspiration from individual elements or Bunad rose painting (rosemaling) and wood carving or embroidery. Such “reconstruction” – often called “festive attire” – festdrakt. Besides, some critics say that Bunad differs from the national costume! In particular, a national costume meant everyday clothes, but Bunad – festive clothing. 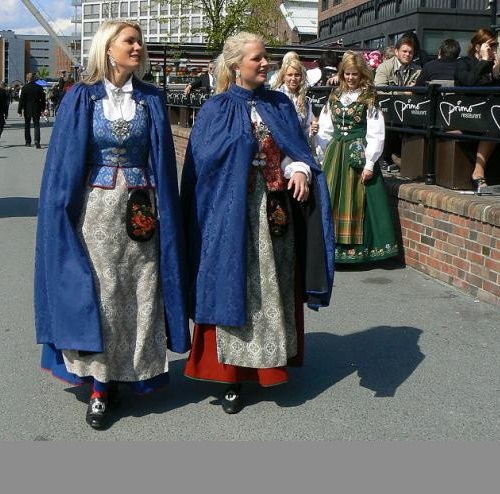 Such disputes are unlikely to interest a foreigner, because both Bunad and festdrakt are stunningly beautiful, and who saw them the first time stood still for a long time in awe, with his mouth open.

Meanwhile, every point of view is debatable, especially since the word “Bunad”, or bunader (plural) comes from the Old Norse búnaðr – “clothes for the house”. And it gives each party an opportunity to argue.

In Norway, there is at present about 200 species of Bunad (plus many variations). The complete set of female attire includes: decorated with embroidery blouse, vest, jacket, skirt, stockings (sometimes embroidered as well!), handbag with a silver clasp, a shawl, mittens for winter, and handmade jewelry of silver or gold – special fasteners, buttons, brooches, which are called slje, earrings, cuff links (for women) earrings, rings, belts and special shoes.

In almost every village (not to mention the city) is its own type of Bunad. Everyone has their past and tradition. Very often Bunad from one locality is different from other in colors. Sometimes in the same village there are several types of national dress.

Most national costumes preserved more or less intact, and only a small part of it was reconstructed in the early XX century on the basis of historical sources. 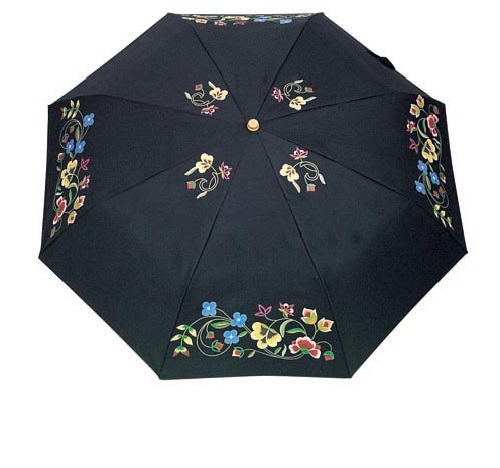 Interest in national costume originated in Norway in the second half of the XIX century as a manifestation of national romanticism. The country is striving for independence and self-determination, longing to gain national symbols. One such character became a national costume. Many women of the privileged and educated families are not only wearing Bunad, but also interested in its history.

Bunad “Finding” of the last couple of years – special umbrellas of wool, decorated with hand embroidery and special silver nameplate on the handle!

It becomes clear that, thanks to the Council, Norway has a “Bunad police” (bunadspolitiet), which monitors the correct manufacturing and wearing national costumes. The fact is that not any Norwegian can wear national costume – there is an unwritten rule that you can wear a dress of an area where you were born, or (in extreme cases), where you lived most of your life.

Gradually, there was a kind of women’s movement, which first studied the history of national dances, and then became involved and the national costume. The movement was lead by Hulda Garborg (1862–1934), wife of the famous writer Arne Garborg, and Klara Semb (1884–1970). They were the first who noticed that the suit should not only be beautiful and look national but must be truly historic – thus it is necessary to take into account the color and quality of the fabric, embroidery pattern, types of jewelry and buttons.

To restore Bunad in its original form was not so hard – because, fortunately, in Norway at the time there survived wonderful watercolors and lithographs of the beginning of the XIX century, which depicted ancient costumes.

Undoubtedly, Norway is a wonderful country, because only its young inhabitants prefer to receive a gift of national costume (Bunad), rather than a diamond ring or a “fancy” gadget.