For centuries, Khoái Nội, which can be reached in 40 minutes from Hà Nội’s centre, has been famous for its embroidery. Local inhabitants learned the craft hundreds of years ago from Lê Công Hành (1606-1661), honoured as the master of Vietnamese embroidery, and have been passing it down through the generations since.

In the houses are women sitting by embroidery frames, working rhythmically with a needle and colourful threads to create beautiful paintings of landscapes, and patterns on clothes.

Hành learned the technique in China and upon returning to Việt Nam, taught it to the villagers of Khoái Nội and surrounding areas in Thường Tín District of former Hà Đông province – now Hà Nội.

The embroidered products have made a name for themselves not just throughout Việt Nam – they have been exported to the US, Europe and countries in Asia.

After driving off the crowded National Highway 1A south of Hà Nội and passing through the imposing welcome gate of Khoái Nội Village, one arrives at a peaceful village surrounded by endless green rice fields and red-tile roofed houses. 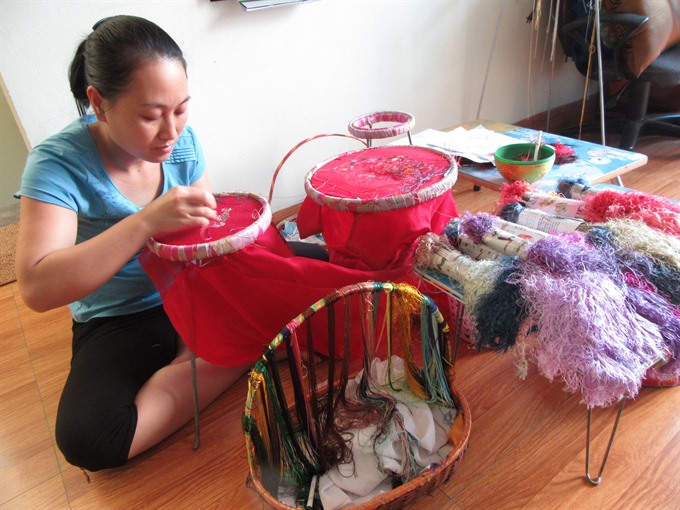 After singing her niece to sleep, village resident Trương Thị Liên continues her work on the embroidery frame. She meticulously chooses silk threads and begins to embroider several flower patterns on a shirt.

Like many villagers, she is attached to the traditional craft.

“I began to learn embroidery when I was only seven years old. The children in the village are taught to embroider at that age to preserve the ancestors’ profession. All my family members know how to embroider,” she says.

Her first clumsy attempt at sewing left her with bleeding fingertips. But she didn’t give up.

“It’s very meticulous work and requires a lot of passion and patience, you can only do it when you love the job,” she adds.

The price of an embroidered product can range from VNĐ200,000 (US$9) to VNĐ100 million ($4,400). It took her one year to embroider a painting she calls Vườn Tri Ân (Grateful Spring Garden) that hangs in her living room, made of silk threads of a hundred different colours.

More than 100 people in her village have preserved the embroidery craft and for generations local families supplemented their farming income with embroidery sales. But Liên explains that many men gradually quit embroidery for more remunerative work and now only women over the age of 35 keep at it.

“What is the most difficult is to portray the enigmatic smile of the beautiful lady. I even became grey-headed because of her eyes. After hundreds of times disengaging the embroidery threads, I finally succeeded. Now whenever I look at her, I have the feeling that her eyes look at me,” he said with a laugh.

Khoái Nội is famous for landscape embroidery pictures such as banyan trees, river wharfs, and scenic spots like the One Pillar Pagoda, the Long Biên Bridge, the Huế Imperial City. The peaceful daily life also features in their work, including the women selling flowers on the street, the harvest season, or rural markets. The village is especially known for embroidering portraits, such as the Mona Lisa, and President Hồ Chí Minh.

Khoái Nội has several well-known artisans, including Nguyễn Quốc Sự (who owns the Quốc Sự embroidery shop in Lý Quốc Sư Street in Hà Nội), Lê Văn Nguyên (known for his embroidery shop Xuân Nguyên on Nguyễn Thái Học Street), and Vũ Văn Hải who has trained a number of talented embroiders in his village despite his young age

The old man has never ceased to look for beauty in daily life and he breathes life into his creations. — VNS – Vietnamnews