The Hmong Cultural Center and the Hmong Archives would like to thank the following people who contributed their time to support this project. Xai S. Lor is the curator of the Hmong Embroidery project. He wrote narratives for the selected pieces to be featured on the Hmong Embroidery website. He also took photographs and worked on the development of the website. Kou Xiong also worked on the website. Shoua V. Xiong of Hmong ABC Bookstore served as a consultant, and answered questions and clarified things that were unclear. Proofreading was provided by Marlin Heise. Mark E. Pfeifer, PhD served as a grantwriter to find funding for the project and also edited the final narratives. We are grateful to Noah Vang for allowing the Hmong Cultural Center and the Hmong Archives to use numerous photographs he provided for the website. 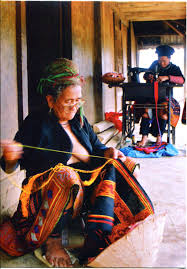 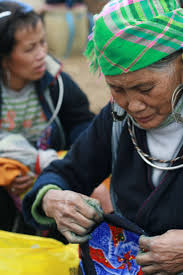 www.HmongEmbroidery.org is a unique, virtual Hmong textiles museum. It includes online exhibits of 213 Hmong embroidery pieces. The website is intended to educate viewers about the many different types of traditional and modern Hmong embroidery and the meanings attached to many of the motifs commonly used in Hmong embroidered art works. The art works featured in the exhibits on the website are part of the collections of the Hmong Cultural Center and the Hmong Archives in Saint Paul, Minnesota.

The www.HmongEmbroidery.org project was made possible through the generous support of the National Endowment for the Arts, and the Asian Pacific Endowment of the Saint Paul Foundation. Without these funders, this project would not have come together.

According to oral history in the Hmong community, it is said the Hmong women hid the ancient Hmong paj ntaub script in the clothing of the Hmong people, especially in the pleated skirts of the Green Hmong. From this time forward, the scripts became motifs or symbols in Hmong embroidery. Knowledge of the scripts was not so relevant in the lives of the Hmong and was eventually lost. Today the motifs in Hmong embroidery are used as decorations in clothing, accessories, and crafts. 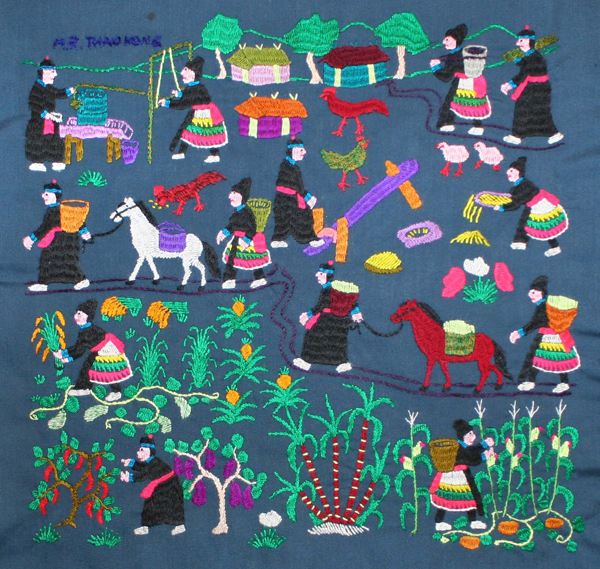 Traditionally, Hmong embroidery is used as a form of decoration on clothing to make it bright and beautiful. Hmong embroidery includes bright colors: pinks, reds, greens, as well as blues, and these are sometimes used to contrast with the colors of yellow and brown overlaid with white (Hassel, 1984). From a young age, Hmong girls learn how to sew and copy motifs from their mothers and grandmothers. As they grow older, the embroidery skills that the girls acquire through their female elders serve to make them more attractive marriage partners (Mallinson et al, 1988: 37).Girls with impressive embroidery skills are admired for their potential ability to sew beautiful clothes for their future husband and family members.

Furthermore, most girls sew their own clothes for the Hmong New Year’s celebration. They dress up in their best embroidery clothes to be seen in public with friends, and engage in courtship with boys through ball tossing and folk song singing activities. According to Shoua V. Xiong (2012), consultant of the Hmong Embroidery project, when a girl gets married, she is responsible for sewing clothes for everyday wear as well as new clothes prior to the Hmong New Year celebration for her family. On New Year’s Day, a Hmong family wears their new clothes to celebrate the festivities. This is supposed to bring good luck, health, and prosperity.

In addition, when a girl is married, her mother will give her a skirt, or several skirts, depending on her social status or how much wealth her family has. Traditionally, the mother makes the skirts by herself and provides them to her daughter as a dowry. When the daughter
becomes old and dies, one of these skirts will be worn at her funeral (Mallinson et al. 1988: 33). In a related vein, a daughter is expected to prepare funeral garments called tsho tshaj sab for her parents as they grow old. These garments are made of hemp cloth, and put on the corpse of the parents when they die. In the spirit realm, the parents wear these hemp garments as they make the journey to meet their ancestors in the afterlife. Hmong clothes were originally made from hemp. Hemp is a very important plant, and the fibers of the hemp stalk are stripped, spun into fiber threads and woven into cloth. It is then bleached and dyed into black or indigo blue. Hemp cloth that is decorated with batik and appliqué work is common among the Green Hmong, and often turned into pleated skirts. The undecorated dyed cloth is sewn into jackets and pants. White Hmong do not decorate their skirts; they are bleached and turned into white pleated versions. The cloth is dyed black and used to sew jackets and pants. Sometimes embroidery motif needlework is used as a decoration on the cuffs and placket fronts of jackets with embroidery stitches, batik, appliqué or reverse appliqué along with embellishments.

Hmong embroidery has evolved to include Lao, Thai, Vietnamese, Chinese, and Western influences with the availability of different kinds of fabrics, threads, methods, techniques, and ideas. For instance, when the Hmong first arrived in the United States in the late 1970s, some of the families were initially resettled in Pennsylvania. While residing there, Hmong women learned a new style of appliqué techniques (quilting) from the Amish community.

The methods and techniques utilized for making Hmong clothes have changed over time. Items are not necessarily sewn by hand any longer. Cotton and synthetic fabrics are now preferred over hemp as the latter is heavy and difficult to find. Hemp is most commonly used for funeral garments in the contemporary era. Hmong motifs are copied, and replicated into machine-made patterns with Hmong designs and motifs. These copied patterns are made into pleated skirts, cuffs, and the placket fronts of jackets, as well as accessories. As the Hmong continue to live in the United States, their lifestyles have changed due to employment and educational opportunities. Hmong women don’t have the time to make embroidery as they once did in Laos. It is more convenient to purchase machine-made Hmong attire at the flea market or the supermarket. These items are relatively cheap and affordable. There are many new styles of Hmong attire, which do not resemble the regional Hmong clothes from the provinces of Laos. At the present time, many Hmong girls don’t have the time and/or opportunity to learn how to make paj ntaub as their elders once did. Many elders do not have time to teach these traditions to their grandchildren. For the reasons above, the Hmong art of making paj ntaub may be lost among future generations.

Hmong embroidery has changed over the years. Hmong women adapted traditional motifs, and developed new styles of paj ntaub and crafts for commercial purposes, especially targeted to tourists and the Western market. From traditional textile decorations on clothes, they developed tapestries or story cloths. These tapestries first appeared in the 1980s when the Hmong people lived in the refugee camps. There was little opportunity to make money, so the women used their embroidery skills to earn income to support their families. On the story cloths, the women depicted the war experience through embroidery needlework, and similarly the village life that the Hmong were once familiar with when they lived in Laos. The squares normally found on the qua sev, a belt that is traditionally worn on the Hmong women’s waist with Hmong clothes, were also adapted to larger sizes. These oversize squares were transformed into tablecloths, pillowcases, and wall decorations. They also inspired household and accessory items including cup coasters, aprons, bags, jewelry, and stuffed animals. These items are now often sold at local art festivals and craft shows. The methods and techniques utilized for making Hmong clothes have changed over time. Items are not necessarily sewn by hand any longer. Cotton and synthetic fabrics are now preferred over hemp as the
latter is heavy and difficult to find.