Embroidery and most other fiber and needlework arts are believed to originate in the Orient and Middle East. Primitive humankind quickly found that the stitches used to join animal skins together could also be used for embellishment. Recorded history, sculptures, paintings and vases depicting inhabitants of various ancient civilizations show people wearing thread-embroidered clothing.

In Siberia, around 5000 and 6000 B.C. elaborately drilled shells stitched with decorative designs onto animal hides were discovered. Chinese thread embroidery dates back to 3500 B.C. where pictures depict embroidery of clothing with silk thread, precious stones and pearls. Examples of surviving Chinese chain stitch embroidery worked in silk thread have also been found and dated to the Warring States period (5th-3rd century BC). Embroidery is the art or handicraft of decorating fabric or other materials with needle and thread or yarn. In this way, it has been practiced for decades.

The origin of embroidery can be dated back to Cro-Magnon days or 30,000 BC. During a recent archaeological find, fossilized remains of heavily hand-stitched and decorated clothing, boots and a hat were found.

.During the 1100’s, smaller seed pearls were sewn on vellum to decorate religious items and from the 1200’s through 1300’s beads were embroidered onto clothing. By 1500 A.D., embroideries had become more lavish in Europe, as well as other areas of the world. From this period through the 1700’s elaborate thread and bead embroidery gained popularity. Bead embroidery could be found on layette baskets, court dress, home furnishings and many other items. 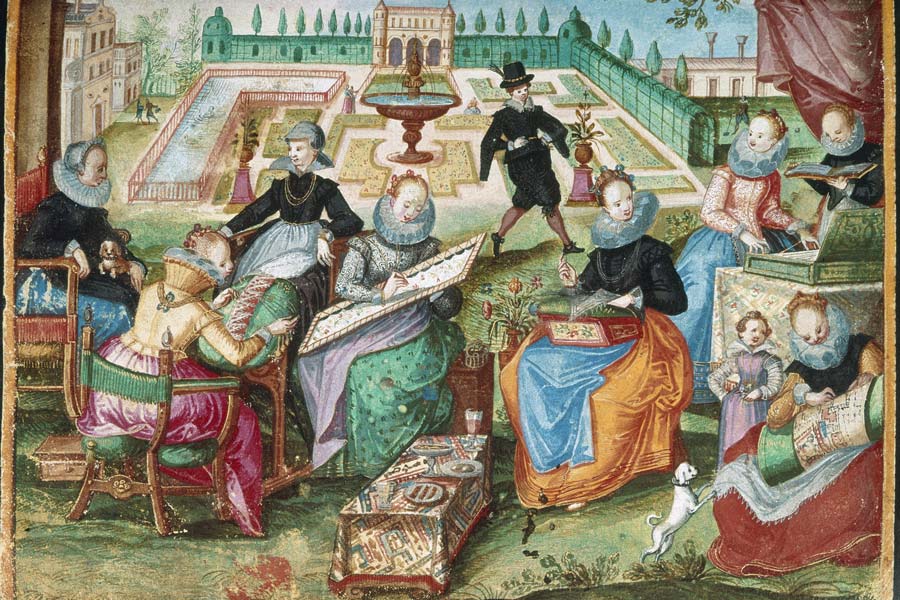 Elaborately embroidered clothing, religious objects, and household items have been a mark of wealth and status in many cultures including ancient Persia, India, China, Japan, Byzantium, and medieval and Baroque Europe. Traditional folk techniques were passed from generation to generation in cultures as diverse as northern Vietnam, Mexico, and eastern Europe. Professional workshops and guilds arose in medieval England. The output of these workshops, called Opus Anglicanum or “English work,” was famous throughout Europe. The manufacture of machine-made embroideries in St. Gallen in eastern Switzerland flourished in the latter half of the 19th century.

The process used to tailor, patch, mend and reinforce cloth later fostered the development of sewing techniques, and the decorative possibilities of sewing led to the art of embroidery. Elaborate freehand stitched thread embroidery began to dwindle with the machine age of the 1800’s when Art needlework and Berlin wool-work appeared on the scene. Berlin wool-work, canvas thread embroidery, was popular through the 1870’s only to be replaced in popularity by counted cross-stitch of the 1880’s, using square meshed canvas with stitch-by-stitch thread designs. With the introduction of printed patterns in color, the need for counting each stitch was pass in many instances. Although elaborate freehand thread embroidery was waning in popularity, bead embroidery was beginning its heyday along with the new needlework stitches of the 1800’s.

Surface embroidery techniques such as chain stitch and couching or laid-work are the most economical of expensive yarns; couching is generally used for gold work. Canvas work techniques, in which large amounts of yarn are buried on the back of the work, use more materials but provide a sturdier and more substantial finished textile.