The History of Embroidery

Other early examples of embroidery are found in China dating to the Warring States period between 5th and 3rd century B.C. In Sweden, the earliest finds of embroidery are from a period known as the Viking Age, around the 9th and 10th centuries. Around the year 1000, the practice of embroidery began to rise in Europe with the growth of the Christian church and royalty gaining power. Richly decorated garments and ornaments in the form of wall hangings and tablecloths were commissioned to display power and wealth.

Embroidery is the craft of decorating fabric or other materials using a needle to apply thread or yarn. The word embroidery comes from the French word broderie, meaning embellishment. In various forms, embroidery has existed since the production of fabric. While embroidery is practiced across the world, its origin stems from China and the Near East. Early embroidery can actually be traced back to Cro-Magnon days or 30,000 B.C. Archeological finds from this time period reveals fossilized remains of heavily hand-stitched and decorated clothing. 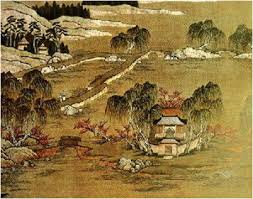 Later, in 18th century England and its colonies, embroidery was a skill marking a girl’s passage into womanhood as well as conveying rank and social standing. Soon after, however, the development of the embroidery machine and mass production came about in stages during the Industrial Revolution. The earliest machine embroidery, found in France in the mid-1800s, utilized a combination of machine looms and hand embroidery.

Moreover, embroidery was important and in the Medieval Islamic world because it was a sign of high social status in Muslim societies. In cities such as Damascus, Istanbul, and Cairo, embroidery could be found on items such as handkerchiefs, flags, uniforms, robes, horse trappings, pouches, and covers.

Today’s embroidery looks a lot different from the embroidery of the past. Most contemporary embroidery is stitched with a computerized embroidery machine using patterns that are “digitized” with computer software. While the style and technique of modern embroidery may be different from its ancient roots, much of the purpose and use of embroidery remains the same. Embroidery has, and always will be, a popular way for people to decorate their homes and themselves with personalized brands and logos.

Embroidery was no longer just the pastime of the upper class, as it could now be done on cheaper materials. Furthermore, while embroidery was historically performed primarily by women, the art of embroidery was now being enjoyed by men. During an interview, actor Henry Fonda revealed that embroidering was his favorite hobby.  Another famous male embroiderer was Gustaf V, King of Sweden between 1907 and 1950.