Handicrafts are the mixture of significance and artistic feeling of its people who assess the level of culture and expressions of national identity. People serve them with cotton, thread, silk, wool, metals, wood and stone and use their talent to shape these things in beautiful designs so in this way, actually they play very important function for the society. (Quddus, 1992) Handicrafts are also most important symbol in terms of economic development. Economically home based work has helped men and women both for the long time period. Now a days this market get progress and became internationalized but men get more benefits from it then women and move to the many profitable areas and the adaptation of these workers into unorganized sector have made women more insecure and lead them to the exploitation of their skills.

The present study is about the contribution of women in handicrafts. The current theme of research regarding handicrafts is to find out the type of embroidery work that women do in their houses and also the problems and benefits they get from their embroidery work. While there is a lot of researches are presented on this topic but there is a lack of attention on those home base women workers and their contribution in handicrafts (embroidery). This study would add a knowledge and information to the existing one. Moreover in Pakistan this work is impossible without women’s contribution. So, it would also help us to understand the women problems regarding their works. “Handicrafts are items made by hand, often with the use of tools, and are generally artistic and traditional in nature. They include objects of utility and objects of decoration.”).Handicrafts are the things that are produce completely by hand or with the help of tool. They also known as craft work in which useful and decorative things are used to complete it. Generally the term is used to traditional way of making things. Handicrafts are unique ideas that represent a culture and tradition of a country and it is most important in terms of economic development. Handicrafts are the mirror of culture, tradition and the beauty of this work is depending upon the artistic sense of the workers and also on the quality of material and art. Pakistan has a rich history of handicrafts. The great workers of Pakistan have great skills to show their care in craftsmanship and beauty, dignity, form and style are main components of Pakistani culture. (Shaukat, 2006)

The carpet-making tradition of Pakistan is old for the thousands of years. 4000-5000 year ago Weaving was a developed as an art in the Mohenjo-Daro in Sind. In the 16th Century, The handmade carpets produced in Lahore. 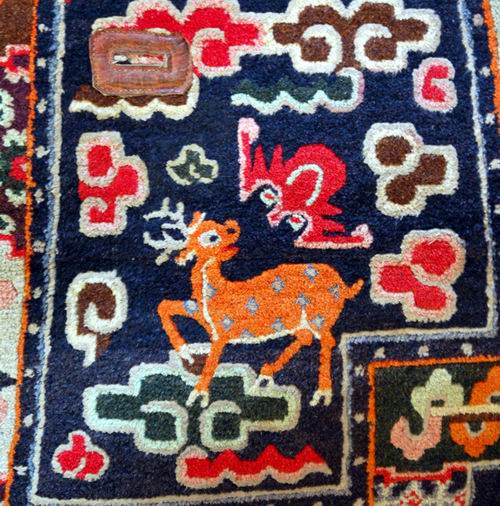 Islamic designs are part of the culture that depicts in Knotted woolen carpets and very famous in both South Asia and the Middle East. Fine carpets are produced in Pakistan especially in Karachi and Lahore. (Shaukat, 2006) In textiles, Sindhi’s bedspreads and shawls are popular and its mirror work and ajrak are also famous, ‘Doz’ in Baluchistan, ‘Phulkari’ work of Hazara and Sawat, kashmir’s kashidakari and cotton Lungies and ‘gotta’ work of Punjab are magnificent work. (Sarfaraz, 1987) Appliqué, Crocheting, Embroidery, Knitting, Lace-making, Macramé, Quilting, Weaving are also included in textile handicrafts. (Ruskin & Morris)

The craftsmen and craftswomen of Pakistan both struggle hard to survive; they express their environs and objects in their beautiful production or art for their profit. There are so many crafts that give the Pakistan a place of compliment in the international crafts. (Sarfaraz, 1987) The credit goes to the craftsperson that makes the very important link between the various traditions through his art or work within the country. Each region has rich in its crafts and the crafts persons of that region put their full effort or feelings in their work. Every region has specialized in its handicrafts and there is variety of its traditional handicrafts. Like the important handicrafts of Baluchistan region are Baluchi embroidery, leather work, carpets and rugs, jewellery, pottery and basketry. NWFP has a rich tradition in textiles including embroidery and block-printing, basketry, leather, wood and metal work. Sindh has a wide variety in textiles in which sindi embroidery, silk, ajrak, block-printing and tie-and-die is very famous work, bangles, lacquer work, jewellery and pottery. Punjab is a land of five rivers and very famous for its local cotton textiles, embroidery, gotta work, basketry, tile and wood work, the silks, ivory, silver work and naqshi art. (Hussain, 1984) Handicrafts involve the different types of creation including clothing, religious symbols and jewelry, and different types of paper crafts. (Malcolm Tatum, 2003) There are hundreds if not thousands of different varieties of handicrafts.

The Handicrafts obviously through Brass, onyx and wood are our traditional handicrafts and are able to be proud. Our hard-working craftsmen put their effort to the carving on metal and wood item and make them very beautiful. Craftsman made these items in small villages and it can easily be purchased in big cities. Metal lanterns, mirror frames, decoration pieces and many other things are included in such crafts. (Shaukat, 2006)

The pottery is very common almost in every village. Bahawalpur, Rawalpindi, Gujrat and its surrounded places are famous for colorful pottery. Multan’s blue glazed pottery is also very familiar since the 13th century. Copper and brass work is mostly done in Lahore. Ceramics and glazed pottery are the oldest art in Pakistan. Blue design techniques are very famous in Pakistan. Pakistani potters are well-known for making the intricate tiles that are used to beautify mosques and public buildings. (Shaukat, 2006)

Wood-carving, Wood-turning, Cabinet making, Furniture making, lacquer ware include in woodcrafts. The furniture of Pakistan is well-known in the whole world for its attractive designs and the artistic sense of the worker. Pakistan has a good wood, “Shesham” is one of them solid wood and only find in Pakistan. The furniture of this wood is very prominent in the whole world for its finishing. 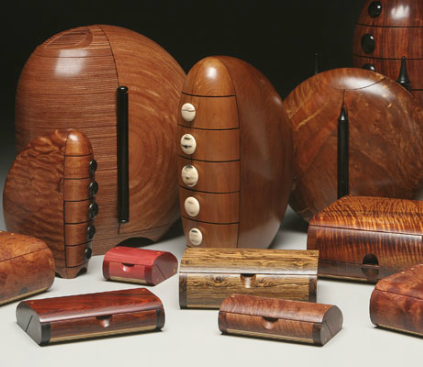 Carved swords, boxes, dishes and tea sets are metal work that is made from silver and gold and precious stones and pearls jewellery are very important crafts. Necklaces, bracelets, rings, hair and forehead decorations and nose ornaments are the main items of jewellery.

Leatherwork and basketry are also important crafts. The baskets of Sindh are colorful and complicated, while weavers in the Northwest Frontier prefer geometric patterns. (Shaukat, 2006)

Embroidery is the art or handicraft of decorating cloth or other materials with needle and thread or wool. Workers also enhance its beauty with uses of other materials such as metal strips, pearls, beads, quills, and sequins. Embroidery is an ancient textile art which uses strands of embroidery floss or wool to create a picture in thread on canvas, linen or other cloth. It forms a part of needlework. Embroidery has recognized as a creative expression of people and it is storage of our oral traditions which have been maintained by the women. 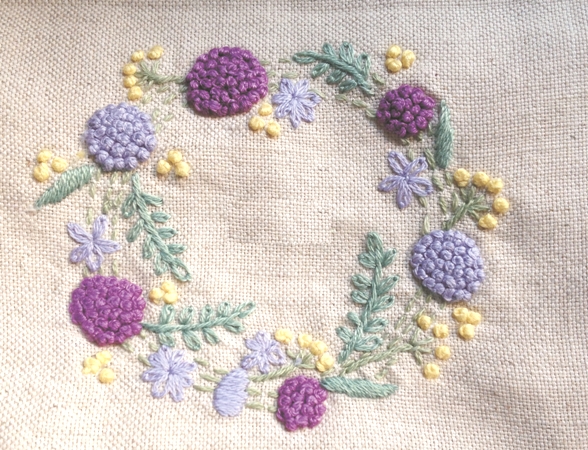 Embroidered textiles are often used to decorate living spaces, temporary or permanent, impressive or modest depend upon choice and the sense of owner. Historically, embroidered textiles shows the wealthy and influence touch of rulers, courtiers, and courtesans. Among South Asia’s many people are identified by this textiles frequently, personal status or religious affiliation. (Gluckman, 2007)

The folk embroidery tradition deeply exists in the Punjab. Village women still practice the craft, also stitching bed and cushion covers and a variety of other cloths, but the art probably reached its peak in the late 19th and early 20th centuries. (Beste, 2009)

Baluchi mirror work is very famous and also called “sheeshagi”. In this embroidery small pieces of round mirrors are coated on cloth with button-hole stitch. (Magsi, 1987) Traditionally Baluchi women do it in their homes. Baluchi “pushk” is very familier and make in traditional seven colours; black, maroon, purple, dark blues, greens, orange and white. Sindhi embroidery is covered with flowers and petals with colourful threads by the artistic hands of women. In this embroidery, women used beads, sea shells, precious stones and other pieces of peacock features to enhance its beauty. It is also interesting that women learnt all sindhi embroidery from their mothers and neighbors. The outstanding embroidery of sindh is patch work done on sari, kurta, kanjro, polki , pti, dhanak, pehran and shalwar. (Shah, 1987)

Phulkari embroidery is an embossed work done on handspun and hand-woven cotton clothes. It is embroidered with untwisted silk thread and mostly geometrical and floral designs are made in it. (Ram, 1987) The centre of this work is Hazara in Pakistan and Punjab is also famous of this work. (Quddus, 1992)

Chikan embroidery is a fine needle-craft done by hand mostly using white thread on a variety of fabrics from cotton and silk to synthetics. It is the most famous fine art of embroidery at word level, and is famous not only in India, but also abroad. (Sarna & Shukla, 1994)White work White work is embroidered in white thread, on pure white fabric; it is not at all difficult, and not very expensive. The tools for white work embroidery are minimal. The fabric that is used in this work is depending on the person that is according to demand, it may be white muslin, weave or linen.

Kashmiri embroidery is a type of appliqué work, using waste woolen fabrics and kashida wrought on various kinds of clothing and the cloth used is either silk or wool. (Dhamija, 2004) It is extremely a delicate and refined work and look likes almost drawings and geometrical patterns. The main varieties of Kashmiri embroidery is namda and gabba. (Quddus, 1992)

From the second half of 18th century until the early 20th century, two different types of gold embroidery found ready patrons; these were: zardozi work, heavy silver-gilt thread work upon a foundation padded with cotton thread or paper, on velvet or sation ground; and Kalabattu work: light delicate embroidery, in gilt-silver or silver threads, strips of gilt-silver, gilt-silver sequins, upon fine silk cotton or muslin. Punjab is very famous for its zari work. (Dhamija, 2004) Embroidery work is a time-consuming work but in Pakistan traditionally women do it in their homes and pass this art to their daughters too. (Hussain, 1984)

Appliqué work is every kind of embroidery which, being worked solidly on one material is then cut out and lay down upon another, and secured by various ornamental stitches. (Dhamija, 2004) In this type of embroidery, different pieces of clothes are cut out in the number of shapes and then pasted them in the basic fabric by using different stitches. (Ram, 1987)