Embroidery has a long tradition of both professional and amateur production in Europe and was practiced universally. Professional embroiderers’ organizations or guilds existed in Europe at least as early as the Middle Ages, and work of a professional quality was also done in convents, particularly in Italy and France. The church was one of the most important customers for high-quality embroidery. All of the textiles involved in the liturgy—priests’ vestments, hangings, even Bibles—were commonly embellished with some form of embroidery. Religious vestments, in particular, typically had elements of embroidery in their design; the tradition of ornamental bands, called orphreys, appears at least as early as the thirteenth century.

The term embroidery generally refers to any textile foundation that is decorated with needle and thread, although embroidery can be worked on other foundations such as leather. Embroiderers have almost complete freedom to create either linear patterns or flowing pictorial compositions; the needle and thread are not bound by a geometric foundation, as on a loom.

as well as religious tradition, played a role in vestment design, and sumptuous textile designs with no apparent religious connotations were also used in the church (1984.462.1). One such craftsman, Charles Germain de Saint-Aubin (1721–1786), who was employed as a designer to the French king Louis XV, published a treatise on embroidery in 1770 which has become one of the most important sources of technical information on eighteenth-century needlework. His book included a brief history of the art, definitions and uses for specialized tools, and specific instructions on a great variety of stitches in materials such as silk, metal threads, and glass beads. While Saint-Aubin’s work was aimed at the professional embroiderer, pattern books for talented amateurs were produced as well. One such author was Johann Friedrich Netto, who published several embroidery pattern books in Germany during the late eighteenth century (32.121.3). 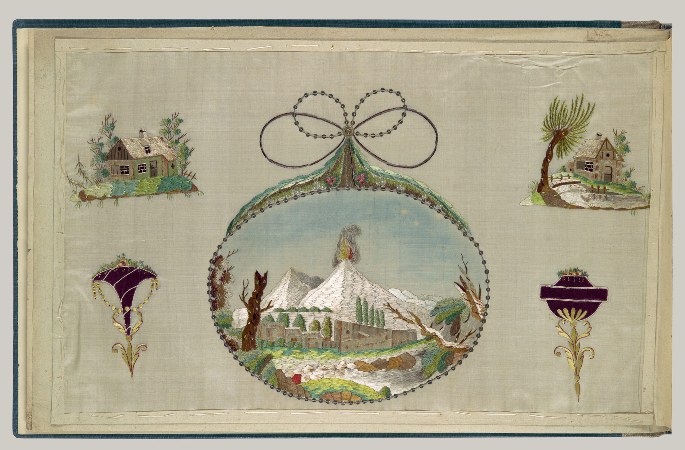 The nobility were also major customers of top-quality embroidery. Individual designers and embroiderers were often retained by a monarch or employed by a noble household to embellish garments, furnishings, and decorations, both for everyday use and special occasions (64.101.1363).

Needlework on canvas was a very popular type of embroidery for furnishings and hangings during this period, and was produced by both professionals and amateurs. Many fine examples from England and France survive. The canvas grid provided a foundation for creating pictures with a very simple stitch (tent stitch), often worked in two sizes that could either cover areas quickly or provide more detail (46.43.4).

On the domestic front, skill with a needle was considered an essential part of a well-bred young woman’s education. Samplers were produced as teaching tools to acquire the needlework skills necessary for decorating clothing and household furnishings as well as household maintenance tasks such as marking and mending linens. A typical sampler consisted of rows of practice stitches and repeating designs; in the eighteenth and nineteenth centuries, the alphabet and numbers were also common motifs. These were made throughout Europe, with variations in style appearing from country to country. As a needleworker’s skills developed, she might attempt more ambitious and purely decorative projects such as a picture on which to display her talent (64.101.1314). Some of the most extraordinary examples of the facility of English needleworkers appear in the category of raised work seen on caskets

These boxes were decorated on all sides with scenes from the Bible or allegorical subjects. Sources for these designs were usually contemporary prints, illustrated Bibles, or books of embroidery patterns. It appears that some of these more advanced projects were designed by professionals and sold in kits for the amateur needleworker to complete.

Pattern books specifically intended to provide models for embroidery and lace appeared as early as the sixteenth century. While most books were simply collections of black-and-white printed designs, a more ambitious publication might include hand-colored plates.