Traditionally, carrying out embroidery work for women has been very much linked with their femininity determined by the local maxim of “Har chamuto har hunar” which means “Every finger bearing a different skill”. Highly skilled artisans are called “Hunarmand Hoost” which means “Skilled hands”. The understanding of what it means to be a woman in Chitral then draws on the skills in various household activities including crafts. Such aspiration for skills among women, however, goes beyond the simple economic needs of individuals and families, and bears on social relations at family and community level. One of the strengths of a young woman in regards to her adoptability after marriage is her skill in various crafts including knitting and embroidery. Embroidered clothes and other products have traditionally been an important part of wedding ceremonies in Chitral. The wedding clothes of the bride groom would include an embroidered band bound around the head of the bridegroom (surband), a skull cap (khoi), a muffler (golband), a small bag to put eye kohl (khaltha), shirt borders (bazurio lai), a jacket (vaskat), a long thin belt (azarband), embroidered sleeves (takband), a wallet (batva), a cover for a comb (kangidan), a cover for needles (suidan), and a tea cozy (tikuzi), amongst others; and the family would discuss the nature of their value and quantity.

Embroidery patterns reflect the decorative elements of a society and its surroundings. The embroidery styles and motifs used in Chitrali handicrafts evolved from the complex history of this mountainous area. Distinct decorative elements still prevail as this region is inhabited by people with very specific cultural traits. The unique motifs of Chitral reflect the Greek influence in that region. Their particular way of breaking space into geometric patterns is unique among other motifs used in Pakistan. The technique of needle-point used in Chitral can also be attributed to the Greeks. The Central Asian Turks contributed more angular geometric patterns, as well as the motif of the cypress tree. Braided embroidery is also used on “Choghas”, a long overcoat made of Shu. The bright and vibrant colors used in the embroideries of Chitral are a traditional stylistic characteristic of this area. The ability of the women to make the intensely intricate and time-consuming embroidery styles is directly due to the extreme weather patterns of Chitral. The long winter months force them to stay indoors and work on hand-made items to sustain themselves economically. Because of the weather conditions, they have practiced patience and finely tuned their skills to make the best product with as much output as possible. 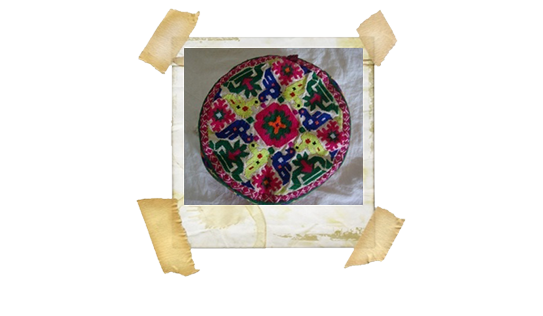 A young bride, a day before departure to her husband’s house, would go around the whole village with her friends to receive blessings from the village mothers and elders and to say good-bye (khodayar). Moving around the village from house to house, the village mothers would bless her for a long lasting wedding and happiness in the new house, and would provide her with gifts (chighech) of embroidered products including khoi, surband, vaskat and other embroidered items. The gifts would be collected by the friends of the bride accompanying her, and boxed carefully to give to her as dowry. In modern day Chitral, most of the above products have disappeared from bridal collections, but the skull cap (khoi), bridegroom band (surband), table cloth (mazpush), mantle cover (panpush), and embroidered bed sheet (chadar) still make an important part of the dowry of a young woman but are managed by the mother of the bride or her relatives.

Silk production and embroidery in Chitral also enjoyed royal patronage not simply because the women of royal family would take special training in embroidery but because they hired local women for silk production. It is partly because of this royal patronage and encouragement of embroidery that women are valued for their capability in the craft of embroidery today. Local women were also encouraged to exchange their best embroidered articles for presents from the royal women.

Research on the Hand Embroidery background has been done by Ali Sher from Chitral and Sumaira Moiz Farooq from Lahore.