Scandinavia is very rich in folk costumes, although for the most part they fall into a definite ‘type’, this one is an exception. Norway has some very beautiful folk costumes, and they are very proud of them. I will elaborate somewhat on the costume of the upper Hallingdal, especially the region of Gol. In Norway, traditional regional costumes which are officially recognized by the appropriate government agency are referred to by the term ‘Bunad’. If a local form of dress is not so recognized, or if it belongs to another ethnic group, the term ‘Drakt’ is used. Two examples of such are the Saami [ Lapp ] costumes, and a costume which has been designed for the city of Oslo, called Samisk Drakt and Oslodrakt, respectively.

I suppose I should mention that there is somewhat of a controversy as to what ‘Scandinavia’ includes, the most restrictive definition would include only Sweden and Norway; most people would also include Denmark, even though it is not located on the Scandinavian Peninsula, on historical, cultural and linguistic grounds. Likewise, the Faroe Islands and Iceland are often included for the same reasons. On the other hand, some people would include Sabme [Lappland] and Finland because of geographic proximity and some similarity of culture, even though they are very different in origin and language. But the Finns are very closely related to the Veps, Karelians, Ingrians, Izhorians, Estonians, and other peoples to the south and east, which arguably are located on the same peninsula, so where do  you draw the line? I will take Scandinavian to refer to those people who speak a north Germanic language.
In order to be completely correct, over the shirt and petticoats, but under the festbunad, the everyday garment should be worn. This is known as heljestakk, and is a simpler version of the outer garment, made either in plain black or plaid. This has a woven band around the hem,  straps over the shoulders, and is worn belted. When worn as the outer garment for everyday dress, the shirt is often of cotton calico. Since this does not show when worn under the festbunad, it is usually omitted today.

I am sorry that I have not posted in a while, but sometimes things get in the way. It occurred to me during my last post that there are entire nations which I have not yet addressed, and I thought I should remedy this. I noticed in particular that I have not yet written anything about Scandinavia. 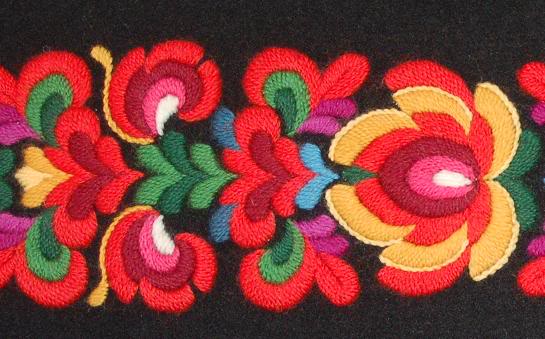 I will be focusing on the ‘Festbunad’, the festive dress of the area around Gol, Hemsedal, Hol, and Ål. These areas, along with Nes and Flå constitute the traditional region of Hallingdal.
Here is a very extensive webpage of the costumes and embroidery of this region, if you wish to peruse it. It is, of course, completely in Norwegian, and also covers costume types which I will not address in this posting. The base garment is the shirt, which was originally a chemise, and later became separated into two garments. There is of course, one or more petticoats worn as well. The Shirt is of the standard Norwegian cut, with stand up collars, collar pins and cufflinks. Most commonly the collar and cuffs have white counted-thread embroidery. The shirt is made of white linen.