Art of the Sinai

Art of the Sinai

Preserving Cultural Tradition
FanSina is located in St. Catherine’s, a small village about a six-hour drive from Cairo, and sits at the foot of the traditional location of Mt Sinai. St. Catharine’s monastery, which was built by the Roman Emperor Justinian in the mid-sixth century, is a frequent destination of pilgrims. 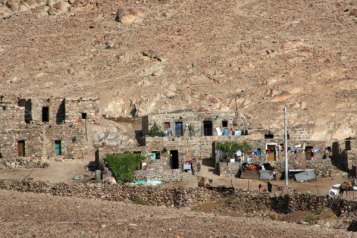 In 1996 the European Union funded a program to establish the natural protectorate of St. Catherine and several others in this region. One of the projects was the Craft and Income Generation Project of the Bedouin Support Program. Initially, the goal was to preserve local Bedouin handicrafts, which were near extinction, for exhibition. However, the initiative was taken further and the products were adapted for the tourism market. Masterful, hand embroidery and bead artisanry often reminds me of the “hamsa”, the symbol of the hand of Fatima, daughter of the prophet Mohammed. It symbolizes patience, loyalty, faith, and resistance against difficulties. The Bedouin Jabaliya women, who create the embellished hand arts for the social enterprise FanSina, represent these qualities too.

However, in the wake of the Egyptian Revolution in 2011 and security concerns, tourism decreased dramatically leaving little if no means of income to this area. 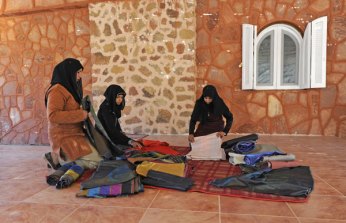 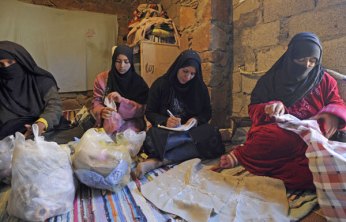 FanSina has grown considerable since its launch. The artisans living in the mountains and valleys around Mt. Sinai, with the primary area being the small village of St. Catherine, are sewing, beading, and embroidering new products. The designs are always based on traditional Jabaliya ones but crafted with an eye towards the modern world.

Women Artisans
Traditionally, the Jabaliya women would embroider when they were herding goats on the mountainsides, the local flora and fauna providing inspiration for their stitching. They are the only Bedouin tribe in the Sinai Peninsula who create non-geometric embroidery designs, and are still adapting these motifs in their work.

Selema Gabaly, Entrepeneur
During the EU project, there was a local Bedoiun woman Selema Gabaly who worked closely in developing the new products. When the EU funding ran out about 12 years ago, she continued working on this project, registering the name FanSina (from the Arabic fann Sina meaning art of the Sinai), and garnering other NGO support.

Selema is very unique among women in this region. In the development community, she is noted as a stellar example of a female entrepreneur who has really made a difference in the lives of hundreds of extremely poor women, all the while facing very stiff cultural opposition. She is one of two women in south Sinai who owns a registered handcraft business.

Selema has established a process of making a “kit” for the women when orders come in. The fabric used to make the products, such as bags and scarves, is purchased in Cairo. From here, seamstresses cut the cloth based on the end product and prepare a kit which is then distributed to the women in the homes. 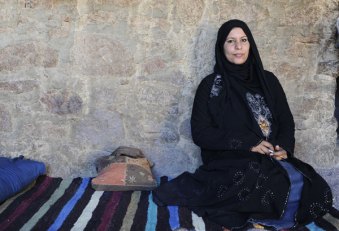 After so many years of working with these women, Selema knows each one well enough to gauge their handwork ability. Each of the older women has her own embroidery motif that she has developed and may train other women in her style. They have discussion of what they want and general idea of what she wants. And except for special orders, each artisan chooses her own hand embroidered and beaded design.

ClothRoads has added some of these special FanSina products to our store. When you purchase from ClothRoads, you help us to build and develop new markets that allow artisans and communities, especially women and girls, to flourish. Please share this onto others.

What began as a cultural heritage project has evolved into a vital source of income for Bedouin families around the village of St. Catherine in South Sinai and now is a unique and important engine of women’s economic empowerment in tribal society. If you want to learn more,